All Hallows Gathering 2017 – The Daytime Hours

I think it is fair to say that 2017 has been my most demanding year yet as organiser of the Dark Gathering.  Speaking now from the other side of the event I can safely say that this year has also been ultimately the most satisfying for all sorts of reasons.  There’s nothing like striving in the face of adversity and despite that, succeeding to give you a real buzz!  However, this most definitely could not have happened without the goodwill and co-operation of many good-hearted folks who seemed to go out of their way to help when unexpected problems occurred.  Peter, one of the Museum’s managers, said that it was a real pleasure to work with people on the Dark Gathering because there were no egos inferring with the work in hand.  Certainly it was refreshing for me to work with folk who worked well using their own initiative and flair for whatever role that they were performing.  Thank you guys and gals!  😀

The day kicked off to a fascinating start with the talented David Pitt holding a Mari Lwyd Workshop in Boscastle Village Hall.  Everyone who showed up during the day thoroughly enjoyed the experience and there was evidence of many Mari Lwyd rattles in the crowd later on!  🙂 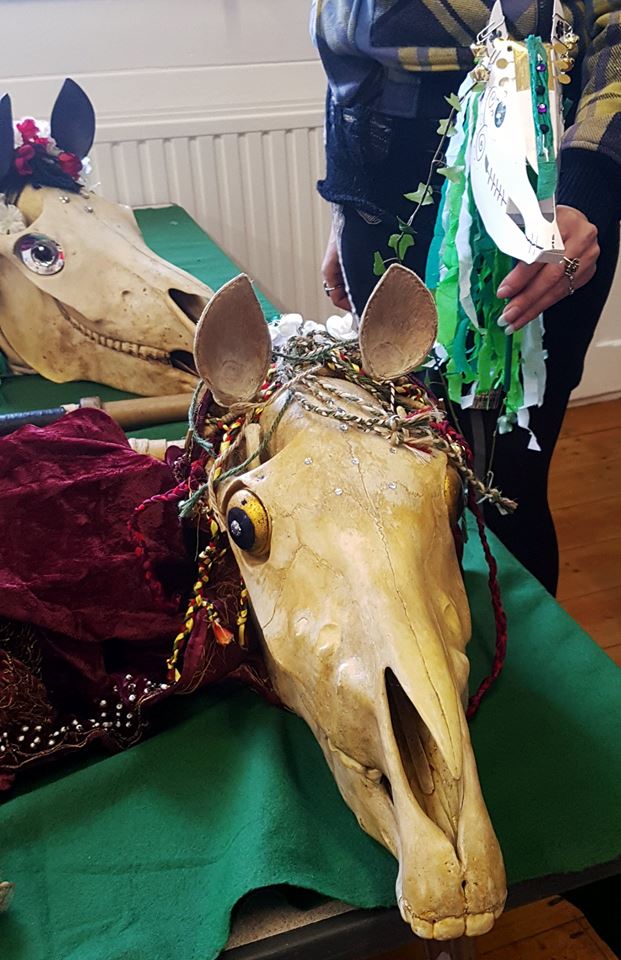 David is a multi-talented artisan and a gifted storyteller.  Here is his website: David Pitt

Once again we were fortunate with the weather and it didn’t seem too long before people started to gather outside the Museum of Witchcraft & Magic, eager to get a good view of the afternoon’s performances.  The Salt Sisters, a duet who sang a cappella was a lovely warm-up act to listen to whilst waiting. 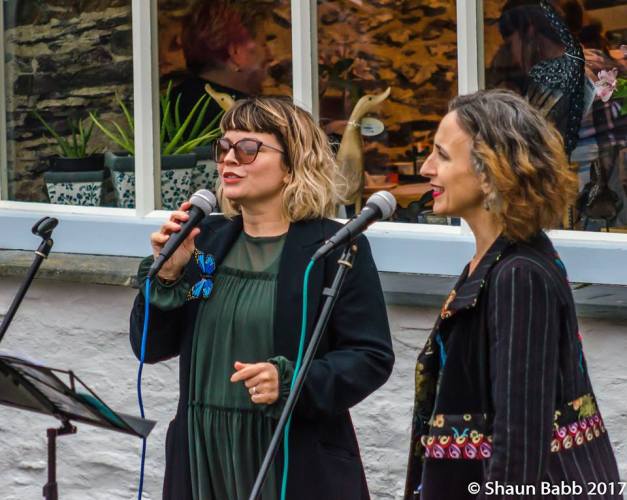 The air was full of the buzz of anticipation as performers and audience began to arrive.  There was even a raven called Branwen who had turned up for the occasion!  🙂

Plus a little owl who flew in for the experience!

Finally it was time for our irrepressible MC Steve Podger to start off the proceedings and the All Hallows Gathering 2017 was under way!

Our local side this year was Wreckers, resplendent in Cornish gold and black who delighted the crowd with their light-hearted and fun entertainment.  It was very enjoyable playing in the band with them and I learnt very quickly to expect the unexpected!  😉 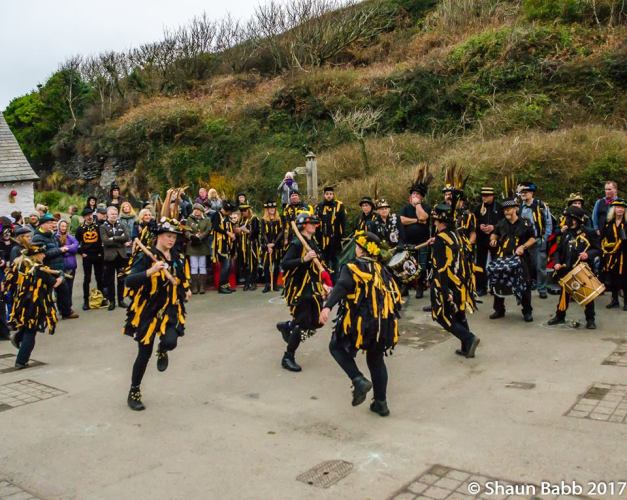 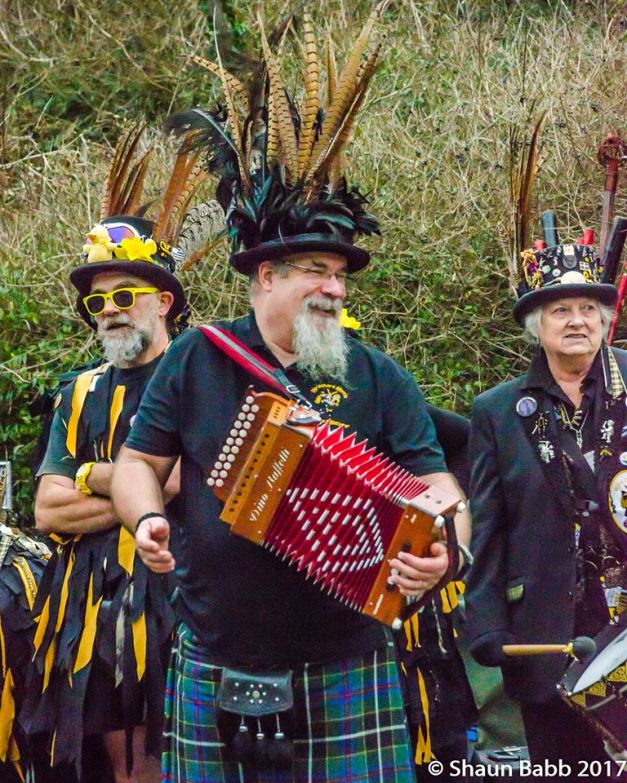 Beltane Border Morris who are part of the backbone of the Dark Gathering were magnificent once again with some new faces spotted amongst them.  They never fail to thrill the audience with their theatrical dancing skills and raw vigour. 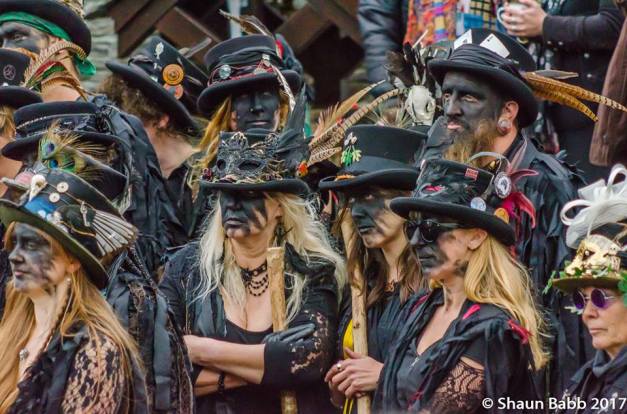 As a surprise component there was a visitation seawards of a young Sea Oss, Morvargh and a Mari Lwyd, Seren who moved amongst the watching crowd during the afternoon.  Young Morvargh was particularly entranced by the music and needed no further encouragement when ask by Wreckers to dance along to their music!  🙂 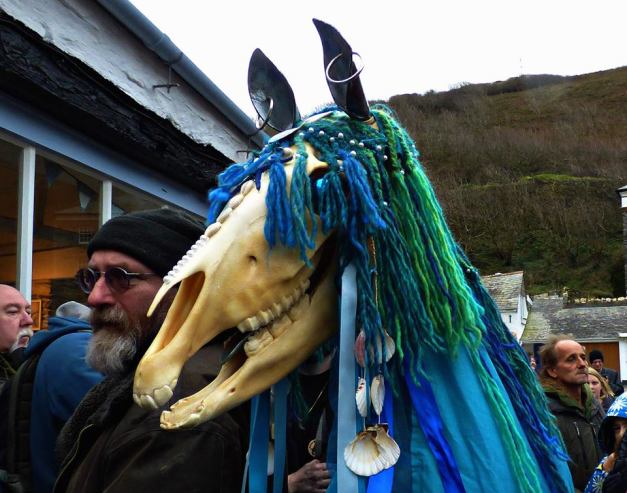 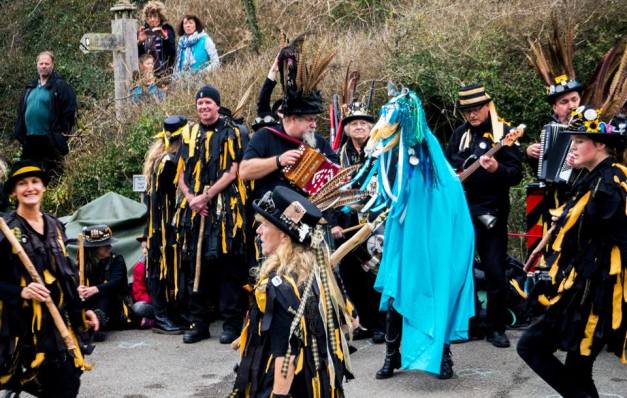 During the break in the afternoon’s Morris dancing we had the local male voice choir, The Boscastle Buoys giving us all lively renditions of many popular Cornish songs and shanties.  Rather wonderfully they raised a total of £160 for the Cornwall Hospice by passing a bucket around to the crowd.  😀 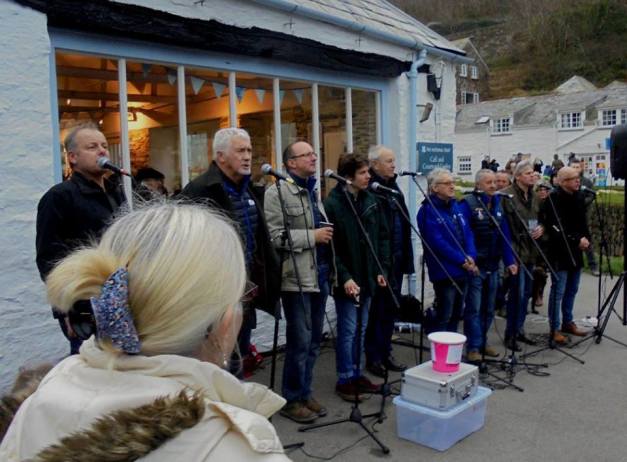 Meanwhile, making their way down the old part of Boscastle was another Mari Lwyd contingent complete with a set of talented musicians who had travelled from Penzance to play with the Maris.  This Mari Party was calling upon some of the inhabitants of Boscastle where they, once they had gained admittance, duly blessed their houses.  Needless to say following some generous hospitality, they were well fed and watered by the time they made their slightly unsteady way to the bottom of the hill – where they had a well-earned rest…in the Cobweb Inn!  😉 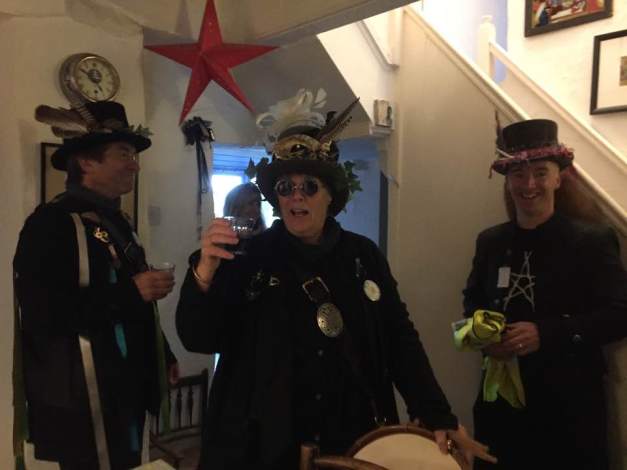 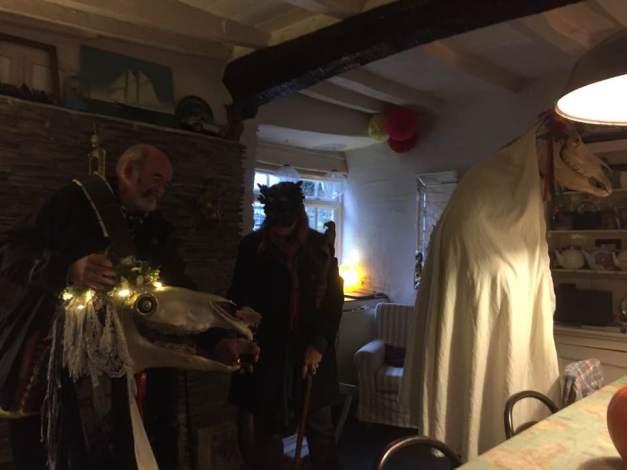 By this time the light was fading rapidly and it was time for the creatures of the night to emerge from the shadows!  Which I will relate to you in my next blog.  😉

And so the anticipation built…

8 comments on “All Hallows Gathering 2017 – The Daytime Hours”