In Memory of Mab

Posted by cassandralathamjones on July 30, 2013
Posted in: Anecdotal Reminiscing. 3 Comments

Here’s something else that didn’t make it into my book: 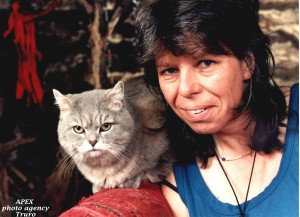 In Memory of Mab

I have described in my book, Village Witch how Mab came into my life and the important part she played in it.  However, she has since sadly died and life is definitely not the same without her.  This is what happened…

Mab was in her 13th year, so was a Grand Old Lady in cat years.  One day in the Spring of 2004 she presented with flu’ type symptoms and a few lumps on her back.  Then I noticed that her pupils were unequal and off to the vets we went.  I came back knowing that Mab’s days were numbered as she had incurable bone cancer.  Her demise was rapid as she became blind, and I cancelled all commitments so I could care for her 24/7.  Those 3 weeks of quality time with Mab are very precious to me, and also very moving as she followed the sound of my voice at all times.  She also took to sleeping with me under the quilt curled up against my tummy – something that was unheard of before.

Then the day I was dreading came.  Mab went very quiet and withdrawn and flinched when touched – Mab was in pain.  I had promised that once this point was reached that I would release her from pain and suffering, and so I made the phone call to the vets.  I specifically asked for a home visit, and fortunately for me, a close friend was with me at the time.  On arrival the vet confirmed that Mab was indeed now suffering and prepared the lethal injection.  I held Mab close as the anaesthetic was given – she was so weak that she could hardly hold her head up.  I was expecting her to just slip quietly away, but that was not to be…

To mine, and everybody else’s horror, she had a bad reaction to the drug and began to fight like a hellcat.  It took all my physical and emotional strength to hold on to Mab.  Five injections later, she eventually succumbed and died in my arms.
Other friends arrived and helped me to ‘lay her out’ on the hearth where she stayed overnight.  Many came to pay their respects, and not all of them human – the cat flap was banging most of the night.

The next day was spent over at Penwith Pet Cemetery where Mab was taken to be cremated.  Her ashes are now in a beautiful casket in a place of honour in my cottage.  When I die Mab will be buried with me.

The next few days were an agony for me.  I felt awful because she fought for life so much.  Then, quite by chance, one of my friends came out with a quote from Dylan Thomas that made everything fall into place:

Do not go gentle into that goodnight

Rage!  Rage against the dying of the light.

This encapsulated Mab’s experience so well.  Mab was such a drama queen; there is no way she would depart quietly.  She was going to have a memorable exit!

Another friend sent me a piece of writing that helped tremendously and I include it here so that it may help others who have had similar experiences:

If it should be that I grow weak,

And pain should keep me from my sleep,

Then you must do what must be done,

For this last battle can’t be won.

You will be sad – I understand,

For this day more than all the rest,

Your love for me must stand the test.

We’ve had so many happy years,

What is to come can hold no fears,

You’d not want me to suffer so,

The time has come, please let me go.

Take me where my needs they’ll tend,

And please stay with me till the end,

Hold me firm and speak to me,

Until my eyes no longer see.

I know in time that you will see,

The kindness that you do for me,

Although my tail it’s last has waved,

From pain and suffering I’ve been saved.

Please do not grieve it must be so,

Who has this painful thing to do,

We’ve been so close we two these years,

Don’t let your heart hold back the tears.

3 comments on “In Memory of Mab”