All Hallows Gathering 2016 – Part One

It’s hard to know where to start on describing the events of the All Hallows Gathering 2016.  From a small, seemingly inconsequential idea birthed in 2014, it has grown exponentially to become a remarkable happening that has attracted worldwide interest.  Since Simon Costin, director of the Museum of Witchcraft & Magic, put out this video from the weekend, it has attracted well over a million hits! 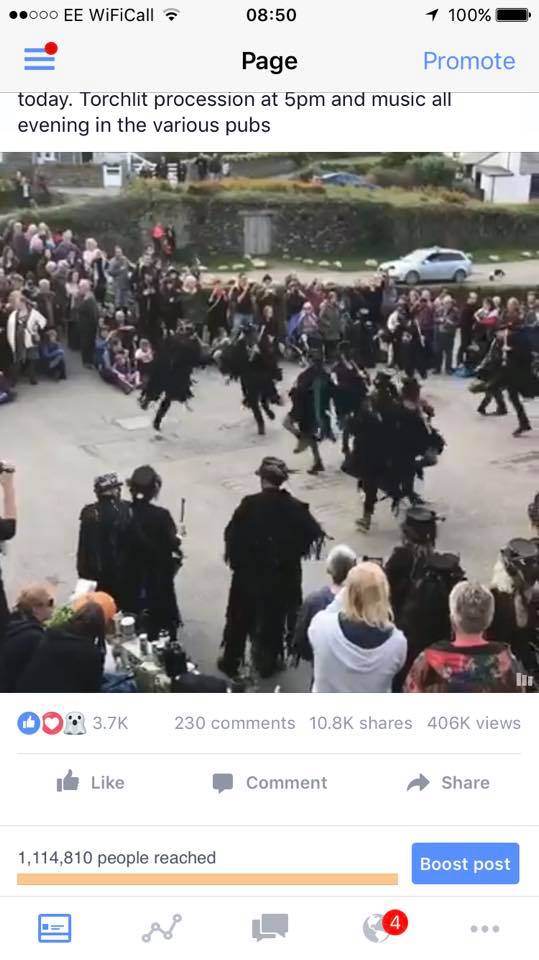 It was estimated that over 300 people attended the Gathering and all accommodation in Boscastle was fully booked.  In fact, it was stated  by a member of the local Chamber of Commerce that the hotels and B&Bs could have booked their rooms four times over – so,  phenomenal indeed!  However, as a result of this remarkable interest in the Dark Gathering it has been agreed by all concerned that it cannot afford to get any bigger because the infrastructure of Boscastle cannot support this.  Therefore all Morris sides and other performers, including Osses and Maris will have to be by invitation only.

However, I’m getting ahead of myself.  This blog is about what the weekend was like and to try and share what the atmosphere was like with others who were not present.  Quite a few of us, particularly the organisers met up at the Cobweb Inn on the Friday evening to relax, catch up, sort out last minute details and generally socialise.

It was during this general ambience that I was informed by my Oss Rider that he had decided for reasons best known to himself to withdraw from performing with Penkevyll.  This could have had a very detrimental effect on the whole event’s proceedings but fortunately within minutes the situation was resolved by someone who heard what had happened and immediately stepped up to the challenge.  A crash course in Oss riding and associated lore was then embarked upon and the possible calamity was averted.  It appeared that the gods were definitely on our side that weekend as although there were quite a few potentially upsetting problems that presented themselves over the weekend, all of them got resolved in surprising and unexpectedly positive ways.  There were definitely a lot of ‘silver-linings’ around!  🙂

Saturday morning dawned bright and clear and it was obvious that the weather gods had been kindly once again., although it has to be said that there were quite a few people specifically petitioning them!  I personally had to be at the Museum early in order to put my new volunteer Rider through his paces as he became accustomed to the energies and logistics of Penkevyll.

Given that Penkevyll’s new Rider had only about 15 minutes of physical instruction, he did fantastically well.  Then it was time to prepare Penkevyll for the evening’s performance as we knew we wouldn’t get time later to do this.  She had a new headdress handmade by Laetitia with LED lights  and it was rather fiddly to secure.  Once done I then had to zip off to undertake a TV interview in the Museum pointing out and explaining various artefacts.  Here’s a brief excerpt:

This was followed rather swiftly by a photoshoot for all the performers, Osses included, in the Museum Library where a temporary studio had been set up.  Then, thankfully, it was time to get lunch of a grabbed sandwich and a cup of tea.

Me and Laetitia had decided some time ago that she would join me in teazing Penkevyll from now on.  Nobody knows exactly what the future will hold and I wanted to be sure that Laetitia was ready to take over the Teazer role whenever that became a necessity.  Given that I’m now nearer to 70 years of age rather than 60, it made sense to me to be prepared for this.

Also, in the folklore tradition and in the Morris world in particular, there has been an recent backlash towards the practice of ‘blacking-up’.  Some of the comments directed towards sides and traditions that we respect have been particularly virulent and upsetting accusing them of racial incitement – which is a nonsense.  As a sign of solidarity, both myself and Laetitia thought we would try this practice of blacking-up.  We were both amazed at how much it altered our appearance and how effective it was as a disguise.  Moreover we subsequently found out from our Welsh visitors from the Mari Lwyd party, that this was used in the past in their traditions.  We have now decided that we will keep this look for any Midwinter excursions with Penkevyll.

The crowds who came to watch the afternoon’s entertainment came from near and far, and gathered well in advance of 3 pm the advertised start time.  Subsequently, the dancing kicked off a full half an hour earlier.  The action started with Wytchwood Morris from Worcester, and I got to play drum with them this year which was huge fun!

Wytchwood looked fantastic in the afternoon autumn sunlight which was a beautiful match to their autumnal coloured tatters.  I particularly like Wytchwood’s energy and versatility and it was a brilliant start to the afternoon’s proceedings.

Next up was the fantastic Beltane Border Morris who delighted the crowd with their wild but highly skilled performance.  Their dark, edgy dancing always thrills the crowd and I get mesmerised by their innovative music and drumming.

Finally it was the turn of Catseye Morris who looked particularly colourful this year and their dancing and music created an interesting contrast to the previous sides’ performances.

During the well deserved break at 4 pm I managed to get Angie Latham and John Isaac together and get a photo taken with them.  I quickly ran into the Museum and ‘borrowed’ a copy of my book as Angie (Illustrations) and John (Photographs) were both excellent contributors to Village Witch.

Before we knew it we were participating in with the last dance of the day – the now traditional Rochester Thistle, performed by Wytchwood in which every side now joins in with. 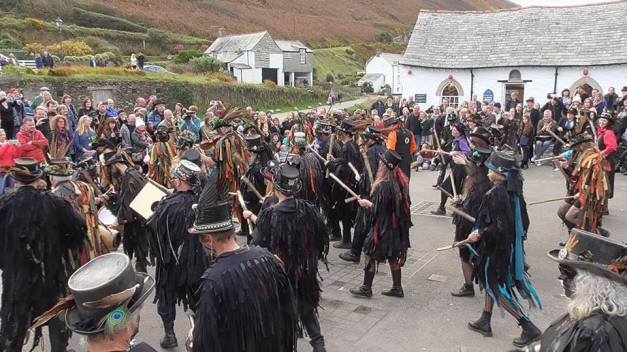 Then it was time to bring out Penkevyll the Oss to send the Call to the Mari Lwyds.